Jessica Jernkins was part troll, only she didn’t know it. Not the kind who lives under bridges and eats stray goats. She would have known that. She wasn’t the fun kind of troll with bright fuzzy hair whose round, plastic, naked body has arms and legs sticking straight out. Although she was kind of egg-shaped, she had elbows and knees that worked and she wore clothes.

Jessica was the kind of troll that has a blackness in its heart. A blackness that sucks in happiness around her and spits out envy and greed.

She was part troll, but nobody knew. 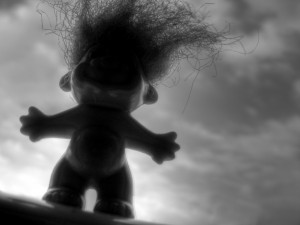 Jessica grew up with her parents in a small, dark apartment. It had windows and the building was in a nice neighborhood with trees and other houses where her friends lived.

But light never seemed to get through the windows to her apartment.

When she opened the door to come home after school, she saw her father sitting in his chair reading the evening paper. The only lamp in the living room cast a dusty beam on the pages as he turned them.

“Your mother’s making dinner,” he said without looking up. As he spoke, the lamp light flickered lower.

In the kitchen, Jessica’s mother was at the stove. It smelled warm and peppery. Her mother smiled when Jess came in.

A square fluorescent on the ceiling lit the walls of the kitchen. More fluorescent tubes glowed from beneath the high cabinets. The light over the stove was on. Jessica’s mother was surrounded by artificial brightness.

Jessica never knew she was part troll because her mother fought the darkness with fluorescence.

“Did you bring a friend home for dinner, Jess?” asked her mother.

“Not today, Mom.” And probably not tomorrow, Jessica thought looking back at her father in his chair.

At school, tall paned windows reached to high ceilings in the old building. Open hallways filled with laughter, light, and fresh air between bells. Her friends were athletes and cool kids, so Jessica was too, during the bright school day.

There was a boy, a boy whose family was respected in town — wealthy and powerful. A blonde boy, an athlete and a scholar, who was perfect for Jessica.

But this boy loved someone else, someone tall and thin with flowing red hair. A girl who stopped conversations just by entering a room. They married.

Jessica left town and the dark apartment for college. When she returned, she brought with her a different boy. A boy who was egg-shaped like Jessica, only shorter. This boy had sunshine in his smile and light in his heart.

Jessica chose well, but she didn’t know it. Jessica chose the egg-shaped boy because he had money. She could not have the boy she truly loved, so she chose one she didn’t for his money.

She moved into a big house on a hill with her new money. The house looked down on the building that held the dark apartment.

Jessica’s mother died shortly after the wedding. The small glow remaining in Jessica’s heart went out.

Jessica and her egg-shaped husband threw parties by the pool for her friends. They drank French champagne and ate lobster.

Every day Jessica and her egg-shaped husband did not work. Every day they spent the money.

Jessica’s father came from the apartment every day and sat in the pool house, or the game room, or the library with silk covered sofas and wet bar. He came every day.

The money and the pool and the yellow silk sofas did not blot out the darkness.

Then a baby came. Lightness edged back into Jessica’s heart. A boy who, like his father, was full of fresh sunshine and laughter.

Blackness receded as the baby grew into a little man. Jessica spent her days in love creating a perfect world for him. A life where sunlight gleamed.

Then came another baby, a girl with raven hair. A beauty that Jessica never knew in herself. The girl tried to catch rays of sunshine that bounced off her older brother. Small fingers reached to grab the brightness blocked by her mother’s heart.

The baby boy grew up and when he was a man moved to another town. He died in that other town because his heart could no longer withstand the brightness denied his sister. He died alone and away from Jessica.

Jessica’s father came to the house on the hill every day.

Until the money was gone.

The house on the hill with silk sofas was sold. Jessica and her husband moved into a thorn-covered gatehouse on someone else’s estate.

The raven haired beauty left, shedding a skin of bitterness behind her.

Jessica’s heart was not black, but it was not light. She took a job and her husband took care of the stranger’s estate. He worked all day in sunshine. Blue sky opened above him as he went through the fields. Every day he brought a bit of blue sky into the cottage. Light started coming through the windows.

One day, Jessica came home from work and saw that the thorns covering her cottage had turned to roses. Pale pink flowers against a cloudless blue sky.

When she came through the door, she found her home filled with light. Sheer white curtains fluttered in the breeze through open windows.

She went into the kitchen. It smelled warm and peppery. Her beautiful raven haired daughter stood at the stove. Her husband sat in a beam of sunlight reading the paper.

Jessica wilted against the door and cried as the part of her that was troll was flushed from her heart.

Chuck Wendig’s Friday Flash Fiction Challenge over at www.terribleminds.com. The challenge: ten chapters in 1,000 words to focus on pacing and arrangement. I chose ten chapters of 100 words each.

4 thoughts on “The Hidden Life of a Part Troll”