We have a new member of the family. We’re going to go pick her up next week. 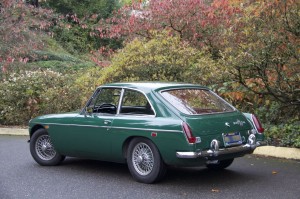 And drive her back to Baltimore.

We’ll be driving through 13 states, an estimated 71 hours of driving time, and 4200 miles.

Moss Motors has an annual motoring challenge and we thought we’d like to play. You get points when you send in a picture of you and your car in front of different destinations. The team with the most points wins. (We should tell that to the Ravens.)

Now, I’m not sure we can win when we start with just 13 days left in the year long challenge, but we’re going to try.

You can check out the list of the places where we need to take a picture of the car here: Moss Challenge List.

This is what I wrote to Moss Motors:

We’ve just signed up for the 2014 Moss Motoring Challenge and the first thing we’d like to do is ask for an extension on submitting our photos. Here’s why:

We (my husband and I) have just bought our car — a 1969 MGB GT. We’re going to pick it up on Thursday, December 18. It’s in Portland, Oregon. We’re in Baltimore, Maryland.

Then we’re going to drive it home. Portland to San Francisco to Bakersfield to Phoenix to El Paso to San Antonio to New Orleans to Jacksonville to Baltimore. With a few detours and extra time in San Francisco, New Orleans, Jacksonville, all the necessary places. Total: 4200 miles, give or take.

The car is being prepared for our trip by Chad Cansler of British Motor Care in Portland and he seems to buy his parts exclusively from Moss Motors, so we’re bona fide Moss customers for this car already.

We’ll be back in Baltimore on January 3 (which is a Saturday). I can FedEx our entry form and thumb drive with photos on Monday, January 5 and you’ll have them on Wednesday, January 7.

So, what do you think? Can we have a little extra time to play?

I’ll let you know what they say.

If you’re wondering why we’re doing this . . . then the posts on this blog for the next few weeks will only confound you more.

UPDATE 12/11/14: Moss Motors has graciously extended the time to submit our photos for the Challenge. Yay!

If you have any ideas about where we can find the required destinations for a photo with the car, leave the details in a comment. Our route is basically I-5 south from Portland to San Francisco. Down the coast south of SF, then over to Bakersfield to touch a wheel onto Route 66. Drop down to Phoenix, then I-10 straight across the country to Jacksonville.